6 Rule Changes That Golfers Should Know About: USGA 2019 Update 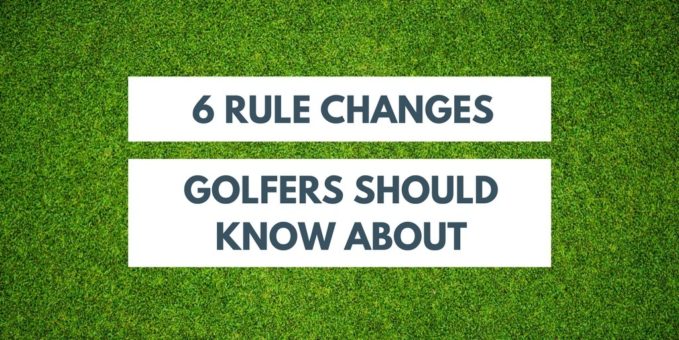 Get Our Free Ebook

Sign up for the newsletter and get our free 30-page eBook on course strategy!

The game of golf has seen its fair share of changes since it was first invented in 1457. Gone are the days of persimmon drivers and balata balls in favor of 460cc drivers and Trackman technology. Thankfully, now the rules are finally catching up with the times.

Last year, the USGA and R&A announced that they would conduct a modernization of the rules to make the game easier to understand at all levels which will take effect January 1, 2019.

Why? Because every four years, the governing bodies have the ability to revise rules that allow them to adapt to an ever-changing golf landscape.

The current review began five years ago and over time, they recognized that these incremental revisions over the years actually made the rules more and more complex leading to embarrassing moments on the game’s biggest stages (i.e. Dustin Johnson at the 2016 U.S. Open, Lexi Thompson at the 2017 ANA Inspiration, etc, etc.)

In all, 30 proposed changes were made by the USGA and R&A to make for what they believed were more fair, consistent and straightforward rules.

Some of the revised rules have already been implemented on the professional level such as eliminating viewer call-ins (thank goodness) or not doling out a penalty for a ball accidentally moving on a green as long as a player is “virtually certain” that they didn’t cause it to move (common sense prevails).

However, ones that will affect you and me have been under review for the last 6 months by players, rules experts and administrators worldwide. After some serious debate, they are now finalized.

Here are six key rules changes we can expect come 2019, why they are being implemented according to the USGA, and what a typical amateur might think about them:

Reason for change: Where a double hit occurs as part of a single stroke and was not the intention of the player, it was felt unfair and unnecessary for the player to be penalized. Just as there is no penalty if a player’s ball accidentally deflects off his or her body, equipment or caddie, there is no need for a penalty when a player accidentally strikes his or her own ball in making a stroke.

Amateur says: This will save me at least 3 strokes around!

Reason for change: Maximum Score will be an alternative form of play that addresses slow play, by allowing a player to “pick up” when he or she scores at or above the maximum and capping the player’s score for any hole at the maximum.

Reason for change: The new procedure lowers the height from which the ball is dropped to increase the chance that it stays within the relief area. Also will help prevent balls from embedding in the sand.

Amateur says: This is going to really help when I’m dropping my 4th ball on the first hole…

Reason for change: Because putting greens are specially prepared for playing the ball along the ground, the rules allow the player to do things on the green that are not allowed anywhere else. This rule change will eliminate the frequent questions among players and referees about whether a particular area of damage on the green is a ball-mark that may be repaired or is a shoe mark or other damage that must not be repaired.

Amateur says: What am I going to blame all my missed putts on?!

Reason for change: The challenge of playing from a bunker is the need to play out of the sand, not to play with leaves, stones or other loose impediments left in place in the bunker. The current approach has created confusion by stating a total prohibition on touching the sand with a hand or club and then recognizing many exceptions.

Amateur says: Like this is really going to help me get it back in play…

Reason for change: Allowing a player to putt with the flagstick in the hole without fear of penalty should generally help speed up play.

Amateur says: Good thing because I usually run my putts 20 feet past the hole!

Check out the full list of USGA’s modernized rules here.

What do you think about these rule changes? Let us know in the comments section!

Dan Bier founded Two Inches Short in 2014. He covers golf’s lighter side semi-professionally for the PGA Tour, but doesn’t discriminate against the others. He enjoys the soothing sound of Jim Nantz’s voice, picking up the tee quickly, and is never afraid to get cute with it. You can find him mainly shouting Phil’s name from his couch, or on Twitter and his website.

How I Lowered My Handicap 8 Strokes in Three YearsBig News! Our New Map Is Live

The Tale of Two Rounds: The Inner Battle of Golf

How to Lower Your Scores With Smarter Targets

What Do You Think About While You Swing? Locus of Attention for Golf