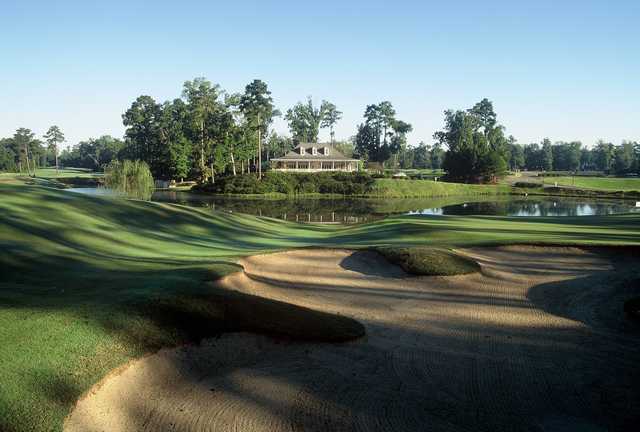 The best golf courses in Louisiana are located in its greatest city, New Orleans. Of course, the first visions that pop into our mind when we think about the Crescent City are always of its great food, jazz, parties, parades and festivals. The Big Easy isn’t well known for golf, but that has begun to change. When the Rees Jones-designed Bayou Oaks Course at City Park opened in 2017, New Orleans announced it had an answer to big-time upscale munis such as Torrey Pines and Harding Park. Bayou Oaks is a very playable and enjoyable track with six sets of and carts with GPS.

Whereas Bayou Oaks stretches to over 7,000 yards, Audubon Park Golf Course in the heart of the city near the Loyola and Tulane University campuses is a 4,800-yard, par-62 executive course. Meticulously groomed by the park stewards, it weaves into the fabric of the city. Don’t let its length deter you—Audubon Park will challenge you.

If you want to test your game on a PGA Tour site, play the TPC New Orleans in Avondale. Home of the Zurich Classic, this is one of Pete Dye’s less diabolical creations. Another good option is English Turn Country Club, whose Jack Nicklaus Signature course hosted the PGA Tour before event switched to the TPC. Although the fairways are fairly generous, the greens present small and intimidating targets, especially the island green on the par-five 15th hole.

Beyond New Orleans, Louisiana’s cultural melting pot is encapsulated by the creed “Laissez les bon temps rouler,” or “let the good times roll.” With beautiful state parks, vibrant coastal wetlands, and the cypress-studded bayou, Louisiana is a sportsman’s paradise. To lure traveling golfers to the state, 15 courses formed an alliance called the Audubon Golf Trail that stretches from New Orleans to the south and Shreveport to the north. One of the Trail’s more notable eighteens is Carter Plantation, located near Hammond, 60 miles north of New Orleans. Designed by Louisiana native David Toms, the routing ambles through a tranquil community with interludes in the lowlands and stretches with striking elevation changes along the Blood River.

Another Audubon Trail highlight, the Bluffs on Thompson Creek  (image above) is a notable eighteen from Arnold Palmer Design about 30 miles north of Baton Rouge in an unspoiled area known as Felicianas (“happy land”). Routed on a wooded bluff within a housing development, the diverse playing field features holes with elevation changes of up to 50 feet per hole.

In the far southwest corner of the state, Gray Plantation Golf Club anchors a master-planned community about 40 miles south of Baton Rouge. This Rocky Roquemore-designed layout, which earned acclaim as one of the best new courses of 2000 and popped up on some prestigious top-100 US course lists, showcases as one of the best golf courses in Louisiana with its bayou scenery and two island-style greens.

Some of the best golf courses in Louisiana can be found centered around Lake Charles. Two of the more prominent Lake Charles-area courses are amenities of rival casino resorts. Contraband Bayou Golf Club, the star attraction of L’Auberge du Lac Hotel Casino, is a Tom Fazio design set amid dramatic marshland. Fazio’s layout is the highest rated of Louisiana’s casino-affiliated courses.

Just a mile from Contraband Bayou, The Country Club at the Golden Nugget, a Todd Eckenrode design from 2015, weaves around native marsh by the Calcasieu River. To ensure optimum drainage, a massive amount of dirt was moved to build the fairways up to a level above the flood plain.

At the northern edge of the Lake Charles region, The National Golf Club of Louisiana, located in a high-end housing development near Westlake, offers an escape on a routing carved through thick woodlands. Fourteen lakes will inhibit you swing on this 7,000-yard budget-friendly layout known for its meticulous course conditioning.

On the hilly border of Texas and Louisiana, Cypress Bend Golf Course, one of the jewels of the Audubon Golf Trail, is a stunning tree-lined track delightfully free of housing. Ten holes play along Toledo Bend Lake and several shots call for water carries over coves.

Shifting to the northwest corner of the state, Olde Oaks Golf Club in the Shreveport/ Bossier City realm features 27 holes designed by Hal Sutton. Though the terrain is very hilly, the fairways are wide to accommodate players of all levels. Wildlife abounds on this course situated near the area’s casinos.

There’s good golf all over Louisiana, so get out and let the good times roll on the best golf courses in Louisiana.

The Practical Golf Forum Is Live! Join the Conversation to Enter Our $6,000 Giveaway
0 views

The Practical Golf Forum Is Live! Join the Conversation to Enter Our $6,000 Giveaway

Don’t Be a Gambler, Be the Casino