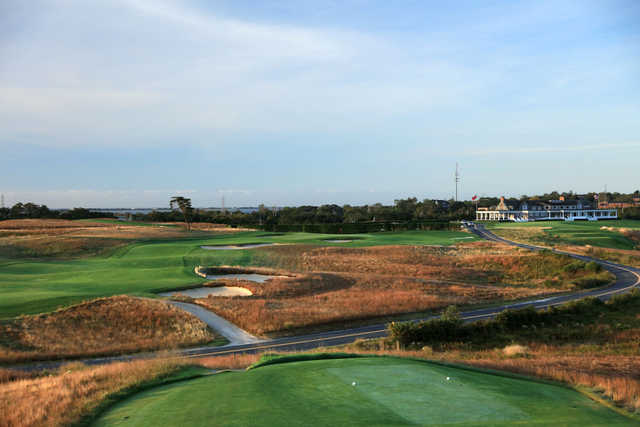 As Shinnecock Hills Golf Club in Southampton, N.Y. prepares to host the US Open Championship for the fifth time, the golf world will be reminded once again of what a great and historic stage Long Island is for golf. The challenging nature of the course will again stake claim on why it’s considered one of the best golf courses on Long Island. To be sure, the island offers some natural advantages, but the real reason this longest and largest island in the contiguous United States is a peerless place for golf is because so many great course architects built courses here. Long Island’s golf heritage dates back to the very roots of the Scottish game on American soil and flourished in the era known as Golf’s Golden Age—a roughly 25-year period beginning around 1910 that saw the game’s popularity increase dramatically and the creation of many great courses. Let’s look at a few of the playing fields, almost all of them private, that cemented New York’s place in golf history.

Shinnecock stakes its claim as one of the oldest organized golf clubs in the US (1891). It was one of five founding members of the USGA and it held the second US Open (1896) and showcased a Stanford White-designed clubhouse that was a marvel in its own right. Shinnecock Hills was a great playground for the rich, and its collection of par threes and penal rough will forever be lauded and cursed.

Shinnecock’s near neighbors in the Hamptons are The National Golf Links of America and The Maidstone Club. All three can be argued as the best golf courses on Long Island and are conveniently located within five miles of each other at the South Fork of the island. The National was the great masterpiece of C.B. Macdonald, the first US Amateur Champion and the man often considered the father of golf course architecture in America. Macdonald took on the mission of popularizing the game and designing a course with no weak holes. At The National, which opened in 1911, he introduced strategic design by creating multiple playing options for every hole. Macdonald built it by utilizing “template holes” inspired by the great holes he had studied in the British Isles.

Meanwhile, The Maidstone Club predates even Shinnecock Hills. Willie Park, Jr.’s 1899 design now barely exceeds 6,500 yards, but it will overmatch anyone if the wind is stirring. This incredibly natural and very wild links course features holes centered around lagoons and others that abut the Atlantic dunes.

Garden City Golf Club, a 1901 redesign by Devereux Emmet, represented an advance in America course architecture that also predated the work of his good friend C.B Macdonald. Like Macdonald, Emmet took inspiration from the strategy required when playing the shining holes of the British Isles. Walter Travis revised the course, which was built on an open plain, in 1906, but it remains a masterpiece of tight fairways, penal rough, very deep bunkers, and wonderful green complexes, an easy consideration as one of the best golf courses on Long Island.

The most revered of all the Golden Age courses on Long Island was Lido Golf Club. This 1917 C.B. Macdonald-Seth Raynor creation was eagerly anticipated because it was built right at the sea. Not only was it tremendously expensive to build ($750,000), it required massive earth moving. Macdonald credited Raynor with literally raising the course from the sea at Long Beach. The Legendary writer Bernard Darwin called it the finest course in the world.

While the vast majority of Long Island’s early and Golden Age courses are off limits to everyday golfers, one exception is Island’s End Golf & CC, a Herbert Strong creation from 1914. Located at the tip of the North Fork, it features a classic and unforgettable par-3 that runs parallel to Long Island Sound. Overall, however, this is an essentially modest public track.

Long Island is also host to a famously public major championship host. Bethpage State Park’s five golf courses are hardly modest. Three of the five eighteens at Bethpage were Works Progress Administration (WPA) projects designed by A.W. Tillinghast in the 1930s. Tillinghast’s rugged, broad-shouldered Black Course, restored by Rees Jones, hosted of the 2002 and 2009 US Opens and it is getting set to host of the 2019 PGA Championship and 2024 Ryder Cup. It’s a walking-only endurance test of formidable hills and huge bunkers, the boldest “Tillie” ever created. If Long Island’s long standing ability to host top notch PGA events & tournaments is any measure, it’s no wonder why the best golf courses on Long Island makes an appearance on the national circuit quite often.