Does It Live Up To The Infomercial Hype? 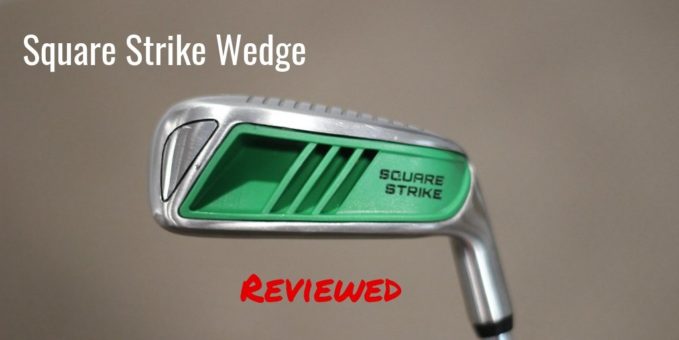 If you watch the Golf Channel on a consistent basis, you have likely seen tons of infomercials for golf clubs. They’re gimmicky, make big promises, and generally, I don’t take any of them seriously. However, they are very effective at selling clubs (or else they wouldn’t keep advertising). So I decided to put one of them to the test to see if there is any merit to their claims. I purchased a Square Strike wedge, which is one of the more popular infomercial items these days.

Despite the club having an unusual design, it genuinely surprised me after testing it.

What Square Strike Is Saying

The Square Strike wedge is very similar to the chipper clubs you have seen for years. Except it’s on steroids.

It is designed to function more like a putter with a very upright lie angle and heavier head. It has 45 degrees of loft, which is similar to a Pitching Wedge from many golf OEMs.

It has an enormous sole, which is supposed to prevent fat shots and help the club “glide” on imperfect strikes and challenging lies. Additionally, the leading edge is angled in a way to stop the club from digging. On top of that, they have moved the weight of the club all the way to the toe, which is intended to promote a pendulum motion.

Long story short, they designed a club that is supposed to help golfers who get excessively “handsy” with their wedges. These players struggle with chunks and skulls that always lead to double bogeys or worse. The Square Strike promotes more of a putting motion, which is much easier for most golfers to reproduce around the greens.

It’s not a crazy concept by any means, or new, but you can’t help but snicker at the club when you first see it.

I tested out the Square Strike wedge several times at the practice green at my golf course. I hit it from various lies that you would encounter on the fairway and in the rough. Despite my initial bias, the club performs very well.

No matter what lies I threw at it, the Square Strike was very good at producing a low running shot. It had better feel than I anticipated, and the weight did not bother me that much.

There was a golfer next to me who was the perfect specimen to test on. He had an excessively long swing on his chip shots and was “flipping” the club with his hands. He agreed to take a few shots with the Square Strike, and he easily recreated the same low running shots I was hitting with it. The golfer told me, “it feels like a sledgehammer, but I would use it.”

I believe this club can be very effective at getting the ball on the putting surface if you have plenty of green in front of you. Based on what I saw, I do believe golfers who struggle with these kinds of shots can benefit from using a club like this.

However, I do have some significant reservations about the Square Strike.

There Is No Versatility

The main issue with the Square Strike is that there is no versatility to the club. It is very effective at producing a low-running chip or pitch shot, but that is about all it can do. Now that is a critical shot to have on the golf course, but part of being a good wedge player is having shot options for many situations.

If you are using this club, that means you are giving up one space in your bag for another wedge.

I did try hitting 45-50 yard pitch shots with the Square Strike. Usually, I use my 60-degree wedge for those shots so I can land the ball softly on the green.

The Square Strike launched at a lower angle, with less spin, and reached a lower height. You would expect this because it has much less loft than my lob wedge. While it is easy to swing the club and make contact, you are going to get a lower running shot that will release quite a bit on the green. Again, that’s not a bad thing; it just limits your options.

I don’t think the Square Strike is a gimmick. It might not be the mythical savior that the website and infomercials claim it is, but this club can help golfers. If you are someone who struggles with wedge shots around the green, to the point where it is debilitating, the Square Strike can likely provide some relief.

There is nothing more frustrating than being 20 feet off the green, and not being able to get the ball on the putting surface. It’s one of the main reasons why recreational golfers post double bogeys or worse. If this club can help eliminate those shots (and your fear of them), who am I to tell you not to try it out?

Why I Wouldn’t Necessarily Recommend It

The Square Strike is more of a band-aid, and I would only consider it as a last resort.

Modern wedges provide so much versatility around the greens, and they are easier to hit than ever because of improved design.

My recommendation for anyone who struggles with pitch or chip shots is to learn how to play them properly first. They’re not terribly complicated, and with the right technique and practice, you can drastically improve. I would rather see golfers do that first than purchase a club that limits the kinds of shots you can play and not allow you to develop your wedge technique.

But I know it’s not a perfect world, and that might not be in the cards for many of you.

I came into testing the Square Strike thinking it was not going to be a viable option for golfers. However, the club surprised me. It’s easy to hit and produces low running shots that golfers do need to execute on the course.

But I do find myself torn about recommending it to most golfers. If you are someone who is miserable with your short game, and can’t seem to avoid heavy shots, skulls, and the yips (all ugly words) – I do think it can help you. At $89, it costs less than most premium wedges, so it’s not a huge investment.

On the other hand, the club is only capable of producing a narrow range of shots. I also don’t think it will help you become a better wedge player overall.

So if your short game is bleeding heavily, the Square Strike could be a nice band-aid. But if your goal is to become a better wedge player overall, it might make more sense to get a few short game lessons and practice more.

You can purchase the Square Strike off their website here.

Want to Become a Better Golfer? This Is a Prerequisite
1 views

A New Addition to the Overspeed Family
0 views

A New Addition to the Overspeed Family

Want to Become a Better Golfer? This Is a Prerequisite

A Real Solution to a Big Problem [Guide]

The Foundations of Effective Wedge Practice