How to Add Speed to Your Golf Swing The Right Way 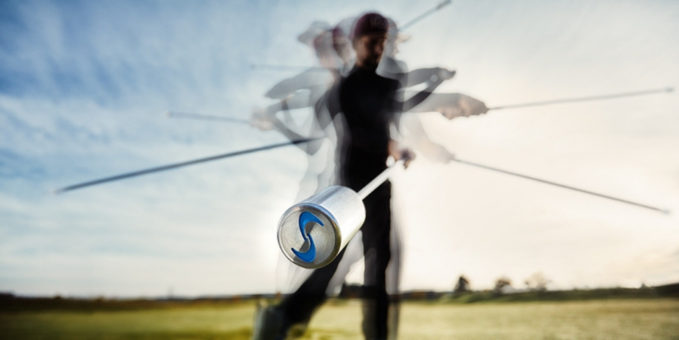 The golf training aid market is dubious at best. People have been inventing gadgets for decades that are supposed to solve the common swing issues golfers face. The majority of them don’t work and have little commercial success, but that doesn’t stop people from trying again and again.

Typically you don’t see me recommend many training aids on this site because I don’t want any of you wasting your money. There are only a select few products that I have seen do well in the current marketplace because they produce results.

One that has taken off in recent years is SuperSpeed Golf. I tried their swing-speed system several years ago when it first came out. I was skeptical before my demo but afterward was shocked at how I had added speed to my swing without feeling any noticeable difference in my mechanics.

I know many of you want to learn how to hit a golf ball farther. Increasing your clubhead speed is one of the ways to get it done, but you want to do it the right way to avoid injury and retain your swing mechanics. This is a product that can help you get it done, but it will require some work on your end.

Since we are approaching the offseason for many golfers, I wanted to revisit this product since it can be a great training tool to keep you engaged during the winter.

What Is Overspeed Training

Last year I was speaking with Lee Cox, who is a teacher to many of the long drive competitors, including champion Joe Miller. He told me that Overspeed training is like removing the regulator from a golf cart. It’s an interesting analogy that I think makes sense.

SuperSpeed Golf defines it as the following:

Overspeed Training works by getting the body to move at a faster than normal speed during a known motor pattern. Essentially the brain has a set range of speed for the neuro-muscular response when a golfer makes a golf swing. We first need to increase the response speed from the body by reducing the “load” or in this case the weight of the club. We then need to gradually increase this load to teach the brain that the body is capable of running the motor pattern faster. In our application to golf, we use a club that is about 20% lighter than a driver, one that is 10% lighter, and one that is 5% heavier in order to achieve maximum results from overspeed training.

Science is figuring out that our bodies are capable of much more than we thought. Recently, I read the book Endure by Alex Hutchinson. It’s an interesting look into how the human body can be pushed (or limited) by the brain. In a way, that’s what SuperSpeed Golf’s training system does – it’s re-programming your mind to help your body move faster for the particular motion of the golf swing.

The concept comes from overload/underload training, which has been around in one form or another for several centuries. A baseball coach named Tom House used it with pitchers to help increase their throwing speed.

The co-founders of SuperSpeed Golf, Kyle Shay and Mike Napoleon, took that concept and created their version of it for the golf swing. Their goal was to help golfers add speed to their swing in the most efficient way possible, which they found out was through a series of weighted shafts.

When most golfers try to add swing speed, they go about it the wrong way. They merely try to swing hard, which usually results in poorer swing mechanics and even injuries. There aren’t many systems that train golfers to move faster, at least that is available as a product.

So if you are looking to add distance to your game, and are prepared to put in a little bit of work, this can be a much more efficient (and safer) way to get it done.

I’ve been through the training protocols several times throughout the last few years. They don’t require a ton of time and effort on your part, but consistency is essential.

Here is a video of beginner training protocol, which gives you an idea of how the product works:

Golfers can expect to gain somewhere around 3% – 8% in swing speed after the first workout, which is similar to what I saw the first time I tried SuperSpeed Golf. To make it more permanent you need to stick with the 6-week protocol. If you want to go above and beyond that, you can graduate to more advanced protocols. All of them are detailed on this page if you are looking to see what’s required.

It’s not a gimmick, but you will get out what you put in.

The Results Speak For Themselves

There are plenty of products that will not produce measurable results in your golf swing. That’s why most golfers end up tossing them in the garage after the first few uses.

Based on what I have seen from SuperSpeed Golf and how quickly their system has spread through the golf world, I can tell you that this is a product that can perform as advertised.

More than 500 touring professionals use the system, most notably Phil Mickelson. You may have seen him warming up with one of their clubs before a round like in this video:

As you know, their livelihoods are tied to how far they hit the ball these days, so everyone is doing what they can to add speed to their swings.

I’ve been following Mike and Kyle since they first started the company several years ago. I see them at the PGA Show every year in Orlando, and they travel extensively to promote their product to golfers. It’s impressive how quickly they have grown, and I don’t think it would have been possible without a product that is producing results for golfers.

My goal is to work more on fitness and gaining speed in my swing this offseason. I performed a quick test with my SkyTrak launch monitor on my first session back with SuperSpeed Golf.

I hit some drives fully warmed up before going through the beginner training protocol and afterward.

Up until this point, I have been pretty “maxed out” on my driver performance. My numbers are as efficient as possible concerning launch conditions, so the only real way for me to hit the ball farther is to add swing speed.

Typically I have a ball speed anywhere between 147- 150 mph with the driver and my total distance is about 265-270 yards when measured on my launch monitor. I have hit thousands of drives at this point, and those numbers have not moved too much. If I happen to hit a drive farther, it is because I’ve launched it higher with less spin, not because my swing speed has increased.

After going through the training protocol with SuperSpeed I saw an immediate jump in ball speed, which is one of the most critical measurements when you are looking to add distance. I almost never crack 150 mph ball speed, but you can see in this image that I got all the way up to 154 mph with a total distance of 281.

That’s the highest ball speed I’ve ever registered, and my swing felt no different. It’s not earth-shattering, but for someone who has squeezed every drop out of their driver, it is significant for me.

I plan to follow the training protocols all winter long and through the spring to make even more gains and hopefully make them permanent.

Just a word of advice to anyone who is considering doing Overspeed training. It is a similar expectation curve to any fitness routine. You will not make huge jumps initially, but if you commit to a long-term plan, and stick with consistent workouts, you will see small gains eventually lead to big ones down the road.

Kyle Shay, the co-owner, had this to say about expectations, “We do see a big spike in club head speed after the first session that lasts for 20 minutes or so. If you commit to the laid out protocols you’ll be able to achieve a more permanent change in speed. The gains will come through a series of peaks and plateaus. Just like any fitness routine, we then change the protocol to break through plateaus and achieve higher speeds.”

If you want to add speed to your swing in a responsible way, I do think Overspeed training with SuperSpeed golf is a great way to get it done. The product has been proven to be effective across a wide range of golfers’ abilities and been embraced by golf’s top teaching and fitness professionals.

While I wouldn’t recommend it for everyone, you should be aware that you will need to put consistent work in. The training is defined very clearly, and you should expect to commit to weeks and months of keeping up with it. Luckily, the workouts are quick and not too overwhelming, so I wouldn’t necessarily worry about burning out.

If you want to learn more about SuperSpeed golf and their training system you can visit their website here. Their most popular set is available for $199.

How to Evaluate Your Rounds

How To Record Your Golf Swing Properly [Full Guide]