How To Make Smarter Decisions Off the Tee 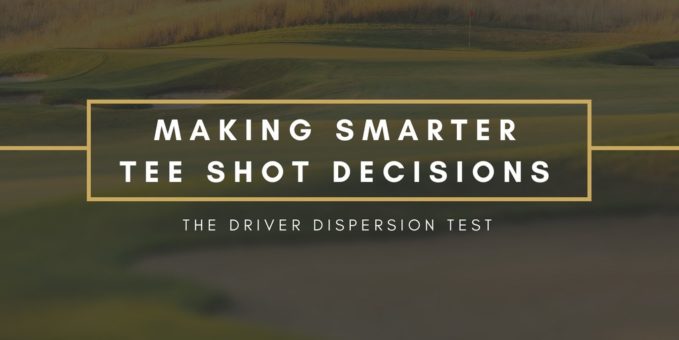 Get Our Free Ebook

Sign up for the newsletter and get our free 30-page eBook on course strategy!

Technology and data are only helpful if you are using them to make smarter decisions. In golf, there has been an influx of both over the past decade. Many times it can be too much, and overwhelm a golfer.

In this article I want to show you how you can effectively utilize a launch monitor like SkyTrak to make more informed decisions on your tee shots, ultimately lowering your score on each hole. This is a fun little exercise that players of all levels can do which will make you more prepared for the golf courses you are playing.

Last year I was visiting my former college golf coach Rich Mueller, who is now in charge of the program at Columbia University. We were talking about how he uses stats and launch monitor data to help his team make smarter decisions around the golf course. Mark Broadie, the inventor of the strokes gained statistic is a professor at the business school there and had a large impact on the program.

I found one technique, in particular, to be very interesting. Rich told me at the beginning of the season he put his players through a tee-shot combine on their launch monitor. His goal was for his players to prove what kind of dispersion they had with their drivers and based on that number they would plan their club selection on holes using satellite images of golf courses.

He had gotten the idea from Scott Fawcett, who is the creator of a highly popular course strategy system called DECADE. The concept seemed pretty brilliant to me, and I wanted to use a similar process with my own game. This video will you a much more in-depth discussion on how it works.

Recently I purchased a SkyTrak launch monitor to help me practice more effectively at home, and have some fun playing simulated courses. You can check out my full review here, but this is a great product that will deliver accurate metrics for a test like this.

Using the range mode I am able to track the dispersion of my tee shots and plot them visually. I had been keeping track of this over several months, but wanted to put myself “under the gun.”

So I hit 30 tee shots to get an idea of what my tendencies are. I was looking for three data points mostly:

Here are a few screenshots of my data that SkyTrak provided.

You can see that a majority of my shots were in a cluster just a little left of my target line. However, I was looking for the total dispersion from left to right, which was 68 yards. Interestingly enough, this falls in line with the formula that is used in the DECADE system. Generally speaking, Scott Fawcett uses a dispersion of about 65 – 70 yards in order to plan whether or not a player should hit driver on certain holes.

Now that I have a general idea of my numbers from working with SkyTrak, I can take this information and use it on golf courses that I play in competition (or otherwise).

A neat little trick you can do is use Google Maps or Google Earth to plot golf courses you are playing. Golf course architecture has a way of repeating itself, and you can make smarter decisions with your club and target selection off the tee before you even get to the course.

Having these decisions made beforehand, and sticking with them is the core of smart course management. You absolutely can lower your scores if you take a more formulaic approach to your course strategy.

With tee shots, your goal is to hit driver where it makes sense. Mark Broadie has shown pretty convincing data that on average when you are closer to the hole your chances of posting a lower score goes up.

At the same time, you want to avoid major hazards such as water, out of bounds, fairway bunkers, or places where your approach shot might be obstructed. The idea is to give yourself a better chance of scoring over time. It’s unrealistic to expect that you’ll never hit a shot that falls outside of your general dispersion, but you are planning for what is typical of your abilities.

Now that I am confident what my dispersion is with my driver, and have my distances, I can make some decisions on strategy.

I know that I am carrying the ball about 250 yards with my driver, and usually, my total distance will be about 270-275 yards. Additionally, I will use a dispersion of 68 yards from left to right which will account for the majority of my tee shots.

This is the 12th hole at St. George’s Country Club in Setauket, NY. This hole always presents a difficult decision off the tee. It’s extremely narrow with out of bounds on the left, and a large hill on the right that is covered with deep fescue and trees.

My overall goal is to try and avoid hitting the ball out of bounds to the left – my average score on the hole will remain dramatically lower if I can accomplish that goal. I have plotted out the 68 yards dispersion at my total driving distance and it puts me well into the OB area (and in danger of hitting my friend Nick Banks’ house!). Additionally, the deep fescue, which can be equally penal is also in play with the driver.

On this hole, I think I’m best suited hitting a club less than a driver that has a more narrow dispersion and take the fescue out of play. It might make my approach shot into the green a little bit longer, but it will help reduce my chances of carding a big number by putting my driver out of bounds or getting stuck in the knee-high grass.

The next two examples are two of the greatest finishing holes I have ever played – the 18th holes at Bethpage Black and Red. Both were designed by legendary architect A.W. Tillinghast who is notorious for giving golfers complicated decisions off the tee.

I’ll start with the 18th at Red, which is a pretty imposing tee shot.

You have two large bunkers that are staggered to the left and right that are surrounded by deep grass. I have almost zero chance of clearing the bunker on the right, but on average I can clear the bunker on the left since it is an elevated tee that will add some distance to my drive.

Using my dispersion of 68 yards I can actually play a little farther to the left. My goal is to avoid the bunker on the right in most instances, and at worst still have an angle from the left rough to the green. On this hole, I think it makes sense to hit driver and aim towards the left center of the fairway. Taking anything less than driver here still exposes me to plenty of trouble and a longer approach shot.

The 18th hole at Bethpage Black presents a more interesting decision. The tee shot faces you with two sets of nasty bunkers on both sides of a pinched fairway.

From the tees I typically play this hole, it is just about 200 yards to reach the end of the widest part of the fairway, which leaves an approach shot of roughly 170 yards to the green.

If you want to take on more distance, Tillinghast begins to narrow the fairway dramatically and adds plenty of risks. Where I usually land my drives, the fairway is only 16 yards wide, and heavily guarded by bunkers and nasty rough. I can’t clear the trouble, and you can see that my driver dispersion brings almost every single bunker into play. Anyone who has ever played this hole knows that if you hit it in those bunkers your chances of reaching the green drop to almost zero.

In this instance, I think I give myself the best opportunity to post a lower score on this hole by playing a 200 yard-tee shot to the widest part of the fairway, and avoiding the bunkers altogether.

How Does This Apply To You?

Generally speaking, the farther you hit the ball the wider your dispersion will be. For players who are driving the ball more than 250 yards, and are relatively accurate, the 65-70 yard dispersion tendency can hold true. However, if you are not hitting it that far it could mean that your total dispersion is far less, and it could make sense for you to hit driver on many holes.

If you do want to be smarter about planning your tee shots I recommend getting access to launch monitors like SkyTrak. You can benchmark your dispersion, and then use that information to make informed decisions on certain holes with your club and target selection. This is a great way to use technology to your advantage and take some of the guesswork out of golf.

Being a smart course manager is about combining the knowledge of your tendencies as a golfer and applying them to the architecture of the course. The more information you have about how far you hit each club, your dispersion patterns, and how that applies to each hole you play, will make your decisions easier.

At the end of the day, your goal is to tip the odds in your favor of shooting a lower score on each hole. You can’t completely control your golf swing, and errant shots are going to occur that will be well outside of your plan. Just keep in mind that this is a long-term strategy and singular events shouldn’t deter you from sticking with what you know is the smarter play.

Is The Players Championship the Strongest Field on the PGA Tour?Best Value Courses In Scotland