The Formula for Golf Happiness 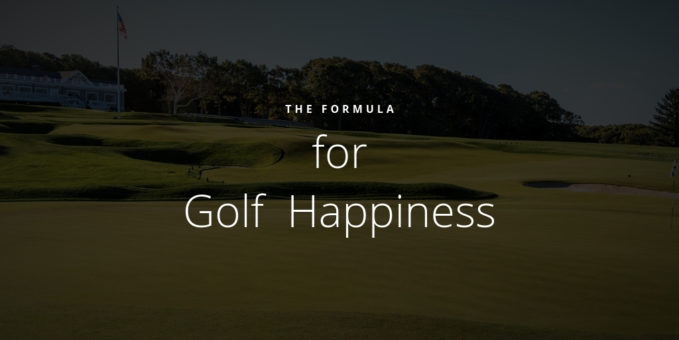 I’m on a beautiful golf course in the middle of winter, it’s 80 degrees out, and I’m utterly miserable. What should be a fun day during a family vacation in South Florida with my father, has turned into a complete disaster. I don’t know it yet but I’m about to reach the absolute low point of my golfing life on the 13th hole.

The round was on a similar trajectory as most went during that time of my life – early mistakes led to anger and frustration, and my mood generally worsened as the day progressed. Golf wasn’t enjoyable for me. It felt like something I should be doing, but I got very little joy out of playing. Despite not playing or practicing much, I felt entitled to shooting low scores, and at the first sign of trouble, I lost my composure.

After hitting a perfect drive on the 13th, I had a 140-yard approach shot with water guarding the right side of the green. I felt this was an opportunity to turn the day around with a nice approach shot.

Something in my brain exploded watching the ball sail 40 yards right of the green into the lake. Years of frustration all came out, and I launched my 9-iron at the golf cart (I can’t stand golf carts). Everything seemed to go in slow motion as the club neatly severed my driver shaft just below the head. The driver head launched in the air flipping end over end and impaled itself into the ground. It was like a bad version of a trick shot video if anger and stupidity were skills being shown off.

My father and I both stared at the decapitated driver, and then at each other. Without saying a word, he walked off the course in disgust.

That was it, rock bottom. Golf had driven me to the worst outburst of anger I’ve ever had in my life, and I quickly realized something had to change. Looking back on this unfortunate episode more than ten years later, it’s embarrassing. I’m ashamed to admit to all of you that it happened, but it was likely the most critical moment for me as a golfer.

My expectations and skill level were entirely at odds with one another, and the disparity between the two was making the game miserable for me. I know this is something every single golfer on the planet struggles with, which is why I want to explore this concept further in the hope of helping all of you find your version of golf happiness.

When we take up the game, the focus is mostly on the swing, and “the fundamentals” like stance, grip, posture, and many of the other technical things I don’t like to discuss on this site. Nobody sets us aside and tells us what we can reasonably expect from golf.

If golfers were given a masterclass on expectation management earlier on, I believe the game would be far more enjoyable for most. On top of that, I think most players would be shooting lower scores (but that’s a whole separate issue). Instead, I continuously come across players who are in the same funk I used to be in.

I try my best to help manage your expectations through various articles that discuss PGA Tour stats, and why great golf isn’t as good as you think. Don’t get me wrong; I’m not a golfing monk – I still have plenty of flaws that are on display. However, my enjoyment of the game is far better than it ever has been.

After 25 years of playing, going through probably too much heartache, I’ve settled on the following formula for golf happiness:

When you start to match up your expectations with your current skill level, that is where you can thrive in this game. The beauty of it is that there is no exact formula for all of us.

You Have To Adjust Each Side of the Equation

When I realized I wasn’t playing the golf I wanted to, and my driver incident made it clear that I couldn’t continue on my current trajectory, I knew something needed to change.

I could either work harder to increase my skill level or adjust my expectations downward. At the time I lived in New York City, which is not conducive to playing and practicing much – so I just decided that when I did get the chance to play, I wouldn’t take things too seriously. Removing that burden made the game more enjoyable, and eliminating my obsession with score helped to make golf a constructive part of my life again.

Years later, when my wife and I moved out of the city, I was able to play and practice more. As my skill level increased, it was not unreasonable to adjust my expectations accordingly because I was ready and willing to put the time in to become a better player.

What Is Your Version of the Equation?

From time to time I think it’s constructive do a little self-examination. I know what golf means to you because it means that much to me. I want to help make sure that golf is a positive part of your life because why else would you spend a large chunk of your day doing something that doesn’t bring you much happiness?

There is a golfer at my course who is in his early nineties. He plays almost every day, and even walks every hole. I’ve had the opportunity to play a few holes with him on several occasions, and he is likely one of the happiest golfers on the planet. He doesn’t care about his score; he is just thrilled to be there. It’s hard to bottle up his perspective because all of us hope to live that long and be able to play at that age. But it doesn’t mean you have to wait that long to readjust your expectations in this game.

If you aren’t happy with your current level of play, what are you going to do about it to meet your expectations? Are you going to take lessons to improve your technique? Will you adjust your practice, strategy, or mental game?

One of my favorite writers, James Clear, continually reinforces the message that your current performance is a lagging measure of your habits. While it’s cliched, if you do the same old, you get the same old.

If you’re not willing to go the route of increasing your skills through better golfing habits, and there’s nothing wrong with that, then maybe it is time to reshape your expectations of the game? Not everyone needs to play to move their handicap lower. Golf can be a way to get outdoors, exercise, spend time with friends, and travel.

That’s the beauty of the game; there is no right way to do it.

No matter how you do it, shouldn’t it be fun though? My hope for all of you is that you find an equation that works.