This Simple Strategy Will Lower Your Scores (I’m Serious) 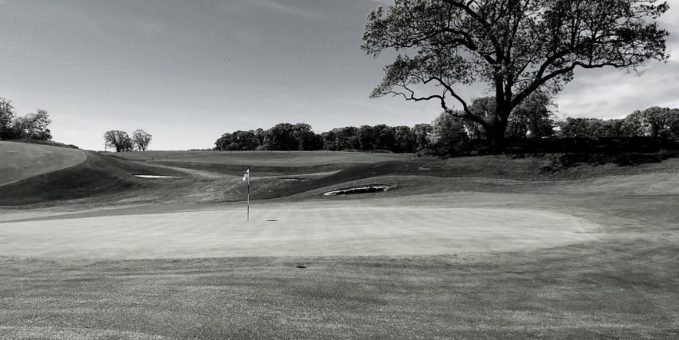 All you have to do to get most golfers’ attention is say “drop your handicap by __ strokes immediately.” The golf industry has generated billions of dollars for itself by throwing these promises around. Sometimes the products and methods are genuine. Other times they are gimmicks. But I can tell you with certainty that dropping your handicap does not come without altering your habits, having a little discipline, and putting in some work.

I have plenty of ways for all of you to lower your scores; many of them are hiding in plain sight. The problem is most golfers (including myself at times) don’t have the discipline to stick with the plan.

Recently, I sent out this tweet, and it embodies a simple strategy I know can help almost every golfer out there:

If the majority of recreational golfers aimed at the center of every green and played the back yardage, I’d wager a large sum of money that handicaps would drop.

In this article, I showed that we don’t have nearly as much control over the golf ball as we think we might. With our irons, in particular, two common issues occur with golfers:

It’s not anyone’s fault because most players are not taught how to approach the course with an optimal strategy. I’m going to propose an experiment that I believe will drop many of your handicaps. It will be incredibly simple to understand, but much harder to implement.

While I can’t account for every single golfer who reads this site, what I’m about to say I believe will help the vast majority of you.

There it is, a foolproof strategy to lowering scores. And I’m giving it away for free!!!

I’ll explain my thinking and break it down into both parts.

“The Center of the Green Never Moves”

Many great players have used some variation of that quote. It speaks to the fact that the center of any green is never a bad target. This is course management 101.

I firmly believe chasing pins will lead to more bogey and double bogeys than it will result in birdies and pars for most golfers.

I’ve used this visual before, but I’ll bring it back again to illustrate my point.

Every shot you hit will have a dispersion pattern from left to right, regardless of your shot shape. Sometimes you’ll miss your target to the left, sometimes to the right. When you only have one chance, it’s hard to predict which way you are going to miss (despite feeling confident in one direction). So when you adjust your target to one side of the green, you are now increasing your chances of missing the green on that side.

I can guarantee all of you that the path to lower scores is hitting more greens in regulation with your approach shots. Just being on the putting surface gives you a better chance at making par (and the occasional birdie) than missing it.

If you choose to aim at the center of every green, you are giving your dispersion pattern a better opportunity to keep the ball on the putting surface. In other words, you are stacking the odds in your favor over the long run.

The Back of the Green

Almost all golfers miss the majority of their greens on the front side. I’ve confirmed this with GAME GOLF

, and will also be presenting some data soon from another shot-tracking company.

There are likely many explanations why, but I believe the main culprit is three reasons:

Whatever the case may be, let me explain why picking the back yardage can be a winning strategy for most of you.

On the whole, the majority of the shots you hit will not be flushed. Heck, even pro golfers don’t hit every shot perfectly on the sweet spot. You want to give yourself enough of a cushion so that you can still hit the green even with a less than perfect strike.

Yes, there will be some instances where you can miss the green long if you are using the back number. However, I will wager that the majority of your shots will not make it to that yardage, or beyond. Again, we are trying to play the odds rather than a 1 out of 10 scenario.

Why You Will Want To Abandon this Strategy

This all sounds easy, but it’s not. Going to the course with a strategy is one thing, sticking with it throughout your round will be another.

The hardest thing in golf is to keep executing a plan despite seeing results you aren’t happy with. If you employ this strategy, you will not hit every green. You’ll still hit plenty of errant shots that miss short, left, right, and even long. That’s just golf.

However, if you stuck with it, and let’s say it added 2 or 3 more greens in regulation per round, it could easily drop your handicap by multiple strokes.

You’ll be tempted to chase pins when things aren’t going well, but you’ll just be pouring gasoline on the fire. You can’t force birdies; they happen by giving yourself enough chances to make them through smart target selection (and of course, quality ball striking).

So if you’re on board for the center/back strategy, you have to commit to it fully.

How Will I Know the Correct Yardages?

I believe the easiest way to get your yardages on the green is with GPS technology. It’s not 100% accurate, but it’s very close. On top of that, it has become more inexpensive.

For most golfers who are on a budget, I would recommend the GolfBuddy Voice 2

If you’re looking for a GPS watch, there are plenty out there to choose from

is a solid budget solution. If you’re looking for more premium features the newly released S40

is a great choice, and I still think the Approach S60

is the best golf GPS watch out there (I use this one personally).

As Basic as it Gets

I know this isn’t exciting information for a lot of you reading this. People want to know how to smash their drives and hit the ball as close to the pin as possible. As always, I want to remind you that you can’t have it both ways in golf. If you are someone who plays to lower their handicap, I can almost guarantee you that if you did not have an optimal target strategy before, using this basic one is going to lower your scores in the long run.

If you want to play aggressively because it is more fun for you, that’s OK too. But I warned you!

I would love to hear from those who choose to try this out and share your results. Feel free to post comments or contact me directly.

A Holistic Approach to Game ImprovementSimple Comfort on & off the Course