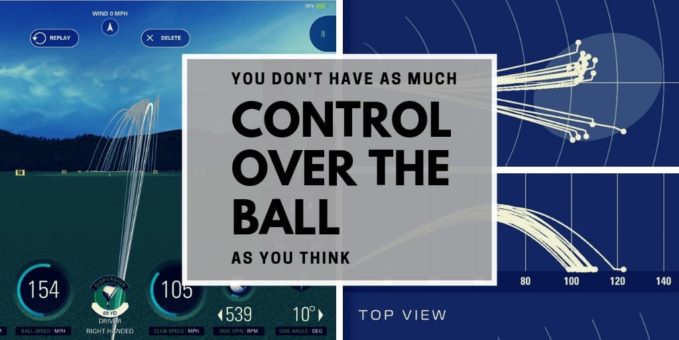 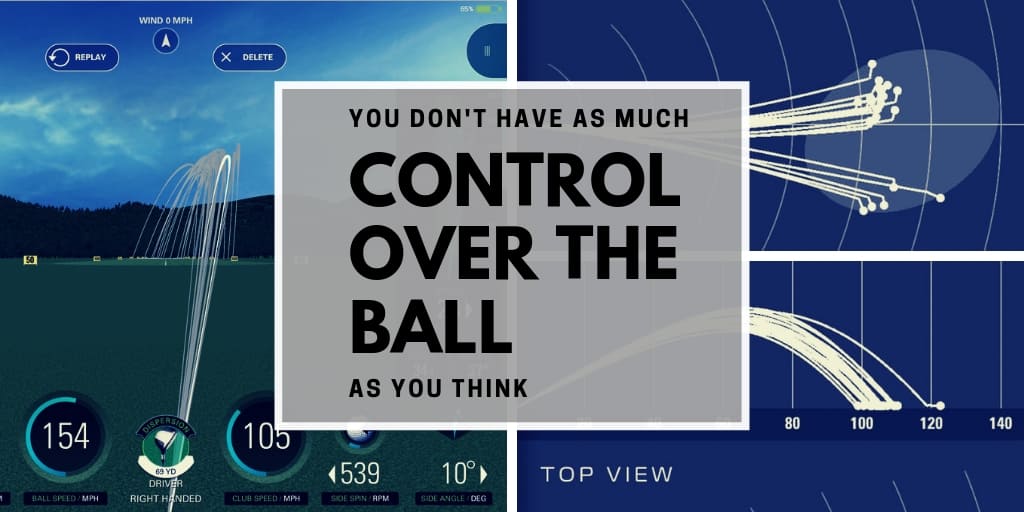 Golfers are constantly fighting a battle with themselves – it’s mainly about perception versus reality. A lot of frustration and anger occurs because many players have a hard time understanding what are reasonable results for their skill level. One of my goals is to constantly help all of you set more realistic expectations on the course so you can have more fun, and make smarter decisions.

In this article, I performed a very interesting test that I believe will open your eyes up, and possibly surprise many of you.

My goal was to find out what my dispersion tendencies are with several clubs in the bag. I hit 20 shots each with my Sand Wedge, 8-iron, 5-iron, and Driver. The results represent what I’m capable of under no pressure – I hit off a perfect lie on a mat and was able to get into a groove with each club. In this session, I would say I was hitting the ball particularly well. My handicap is currently at just above zero, and I would consider myself an above average ball striker (nice little humble brag there).

All testing was done indoors using my SkyTrak launch monitor. You can check out my full review here, but this is a great product that will deliver accurate ball flight metrics for a test like this. 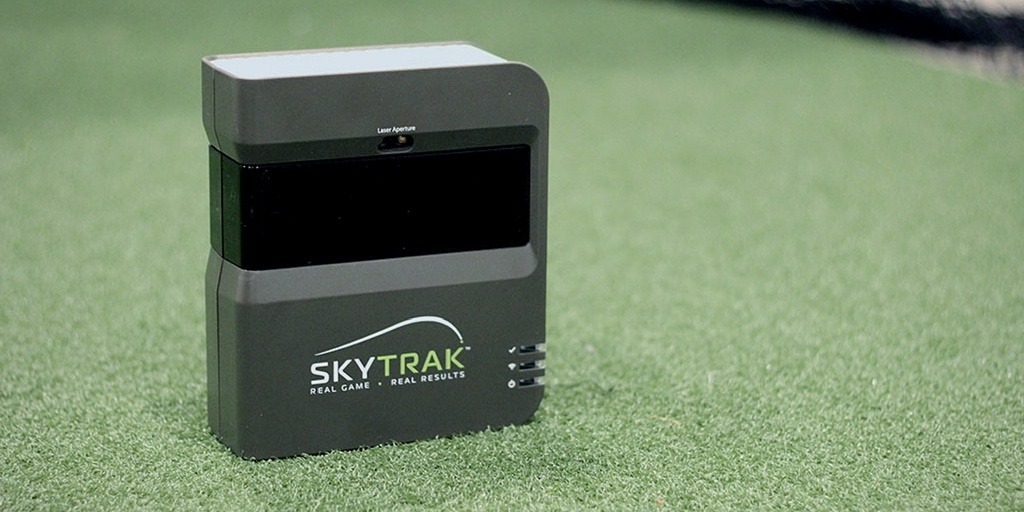 On my SkyTrak I was looking for several things. I set up a relatively easy green to hit with my irons that were 45 x 35 yards to see how often I could land the ball on or around my pin target.

With the driver, I set up a generous fairway of 40 yards wide. Most importantly, I was looking for my dispersion patterns. With my irons, I was concerned with my dispersion from left to right as well as short to long.

I’ll show a few visual shots of what my overall shot patterns looked like, including my dispersion stats, GIR, and also some PGA Tour stats from similar distances.

Let’s take a look at the results from each club, and then I’ll do an analysis afterward.

I’d consider myself a pretty good wedge player, so giving myself a full swing with my Sand Wedge to a target of 105 yards is what they call a “green light special” on golf broadcasts. You (and me) might expect that I could land the ball all over the pin with no pressure at all.

Here’s a look at my overall shot dispersion: 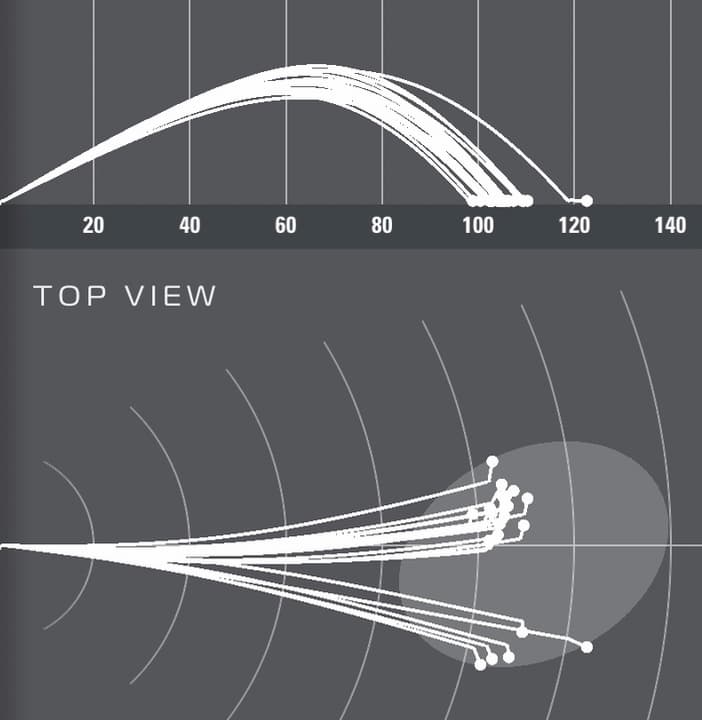 A majority of the shots were at the pin or just left of it. But you can see about 5 shots go away from me on the righthand side. Overall, I hit the green 80% of the time, which is what I’d expect.

However, my dispersion was a bit larger than I thought it would be. Because of a few errant shots to the right, my overall dispersion from left to right was 47 yards. Looking at distance control, my shortest shot was 97 yards and the longest one was 117 yards for dispersion of 20 yards. Hardly pin hunting!

Using the most relevant PGA Tour stat from the last several years, the median proximity to the hole from 100-125 yards is about 20 feet. So even tour players are not landing the ball right next to the pin on average.

With my 8-iron I chose the same green size and a target at 160 yards. Here are my shot results: 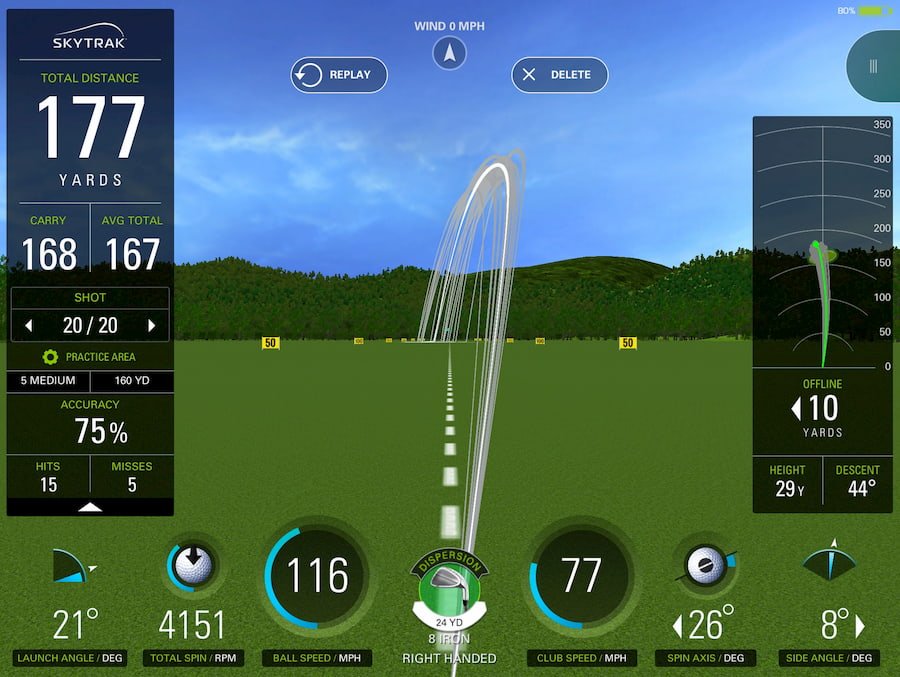 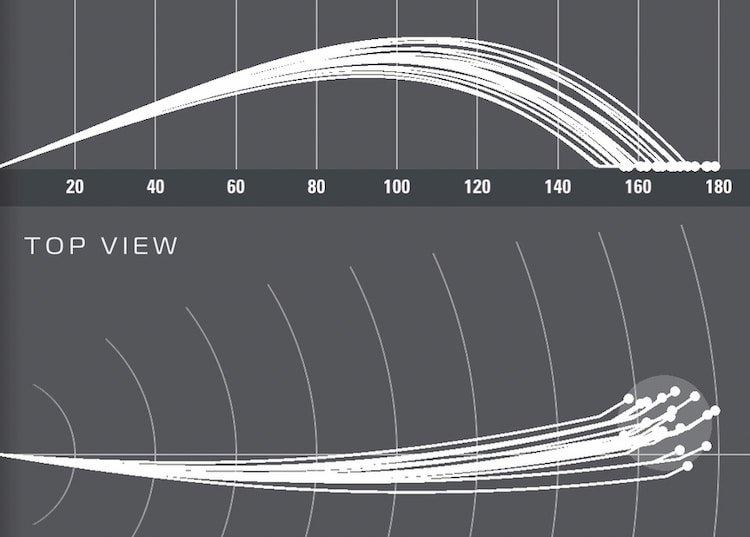 I hit my 8-iron about as good as I can. Most shots were on target and you can see they clustered just left of the pin. I hit the green 75% of the time.

My dispersion from left to right was 24.3 yards, which was actually much better than my SW (chalk it up to no really errant swings). My shortest shot landed 148 yards, and the longest was 171 for dispersion of 23 yards. For a target of 160 yards, this is very good in my opinion.

The most relevant stat on the PGA Tour is proximity to the hole on approaches from 150-175 yards. Over the last several years the median was about 28 feet. 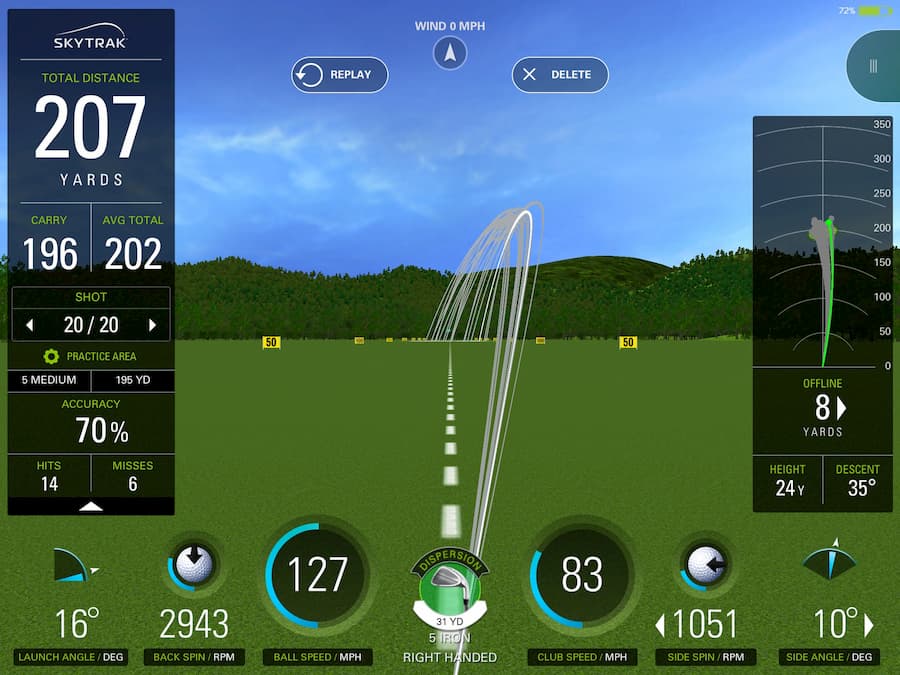 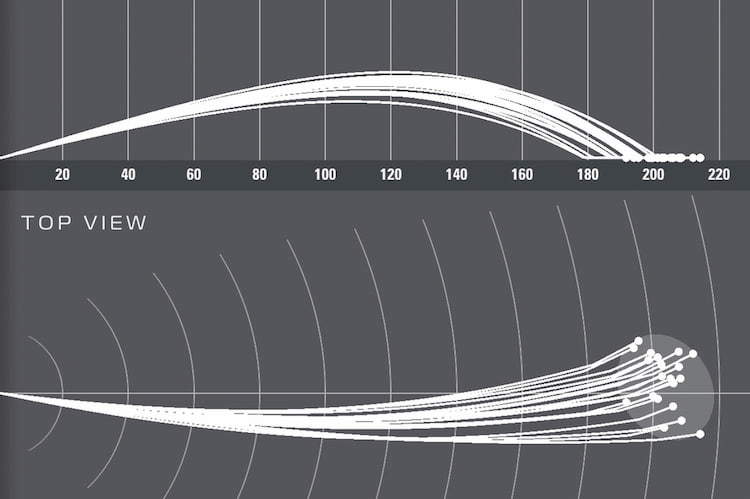 I would say this also represents the absolute best I can hit a 5-iron. I hit the green 70% of the time, which is much higher than I would expect on the golf course.

Looking at my dispersion numbers my total from left to right was 31 yards. My shortest shot landed 178 yards and my longest was 201 yards, for a total of 23 yards. Overall, I thought it was a very good dispersion cluster.

The most relevant stat on the PGA Tour is proximity to the hole on approaches from 175-200 yards. Over the last several years the median was about 34 feet.

For my driver, I set up a fairly wide fairway of 40 yards, which is probably a bit generous considering my skill level. The USGA considers fairways of 32 yards a good width for a scratch golfer to regularly hit them (that is also roughly the average width of fairways on the PGA Tour). Here’s a visual look at my shot dispersion: 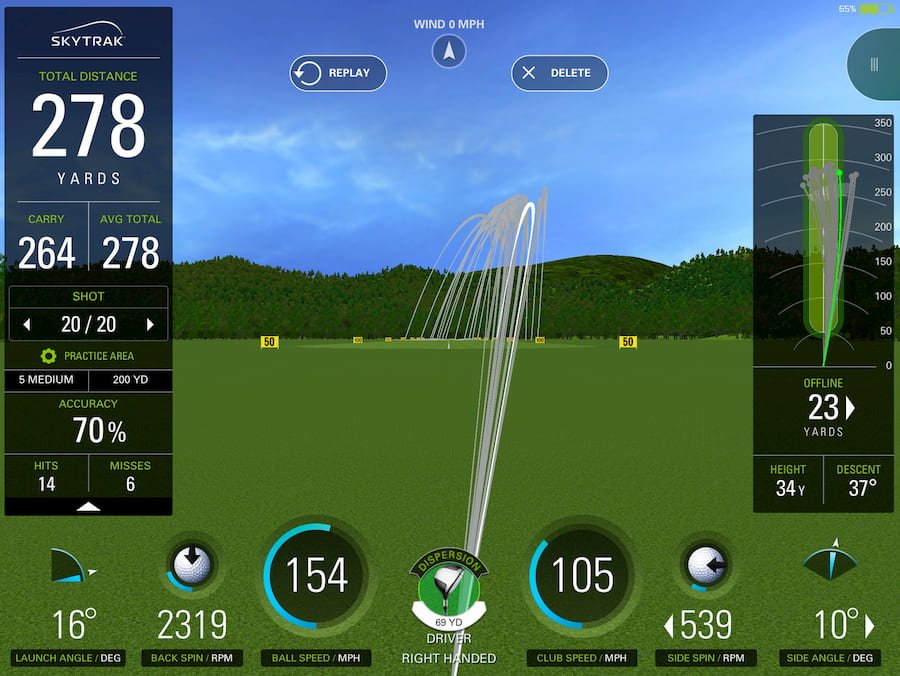 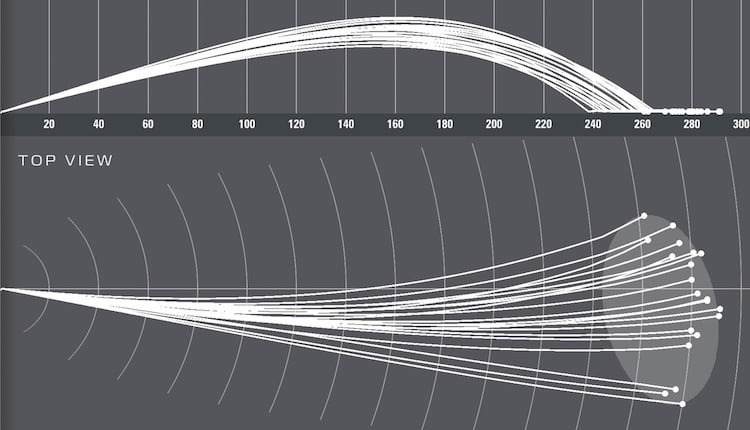 This was a pretty good showing with my driver – I was able to hit the fairway 70% of the time. I was mostly concerned with my left to right dispersion, which was 68.6 yards. That number falls within the range of 65-70 yards, which Scott Fawcett from DECADE usually sees with scratch or better golfers.

What Does All of This Mean?

Hopefully, seeing my dispersion patterns opened your eyes up a bit. A lot of people assume that a scratch golfer under zero pressure could place the ball wherever they want. I often joke that I could play professionally if I could take my shots on the range. I believe this test shows you that is hardly the case.

The proximity data from the PGA Tour shows you a couple of things as well. Those guys are absolutely amazing ball strikers – but I think most golfers overestimate how close they can land the ball to the pin. With a sand wedge in their hands, a typical tour player is landing the ball 20 feet from the hole. That kind of puts things into perspective when the weekend warrior gets upset at themselves for not knocking down the pin from that distance!

So what are some good takeaways?

First and foremost, no golfer on this planet has complete control over their ball. As skill level increases, the tightness of dispersion patterns certainly decreases, but better players are hardly hitting the bullseye every time. Stop expecting so much of yourself on the course.

Secondly, smart target choices take into account the randomness of your shot pattern. You saw just how large my dispersion circle was with a sand wedge. Just imagine if I was aiming at a pin that was tucked on the left side of the green with trouble surrounding it. Or what if I was chasing an angle into a green with my driver, but that exposed me to a hazard? When you’re on the course, start thinking of those larger circles and evaluate what parts of the course are coming into play based on your target. The hero shot is going to result in more double bogeys than birdies – trust me.

We Don’t Have Control, and That’s OK

I’d like to wrap this up on a positive note. Most of this article was illustrating just how little control over our shot pattern we have (relatively speaking of course). However, I don’t want to discourage you.

I believe any golfer’s goal should be to tighten their dispersion patterns overall, that’s what becoming a better ball striker is all about. But at the same time, the strategic side of the game demands that you weigh the risk and reward of each target selection. No matter how skilled you become, this is always going to be an important part of scoring.

Many golfers don’t know what their typical golf shots look like. I’d encourage you to find out either by working on a launch monitor, or even using a shot tracking device while you play. Once you start to understand your tendencies and abilities it can empower your decision making, and yes, lower your scores.

In the end, golf is a challenging game because of everything I discussed in this article. The best we can do is accept that on some level, and free yourself of expectations that are too demanding.

One of the Legitimate Training Aids TestedRead This Article Before Buying Them!

Avoidance Is Not a Good Strategy
0 views

Avoidance Is Not a Good Strategy